This post is a little different, for three days we had the wonderful Kerry Dyer (blog here) showing us how to make plaster molds for casting latex.

Despite not needing to cast latex for this particular puppet I though I would upload this post as it's a very useful skill to have. I apologize that there are some photos missing from the process. I will do my best to explain the missing steps.

Step one: Build and armature for your hand/arm/foot and then sculpt over it using Plasticine making sure you add any details like fingernails or skin texture.

Step two: Make a bed of clay and lay the Plasticine hand into it so that it is half covered. You then need to make sure the clay is smoothed and pressed against the hand all the way around. This is shown in the two photos below. You will also need to place a 'key' over the exposed k&s, this will help you remove the hand later on. 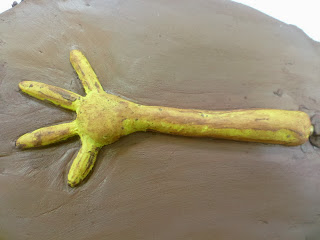 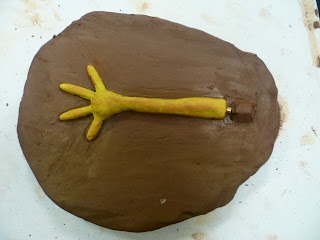 Step three: Draw a box around the arm leaving a few centimeters of space all the way around. You then need to put a clay 'key' in each corner of the box. These 'keys' will ensure that the two halves of your plaster mold will align perfectly. You can then cut off the excess clay.

Below you can see the box I made, at this point I had just poured the first half of the plaster into the box. This particular plaster took about an hour to dry. My advice is to walk away from it for a while or you might be temped to un-box it too soon. 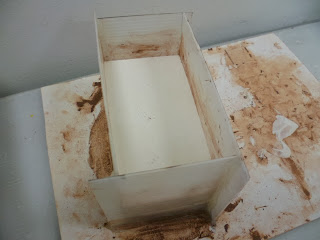 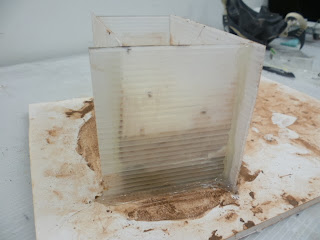 Step five: Hopefully by now your plaster has set and you can pull off the plastic. You should end up with something similar to the photo below. Next carefully pull the clay away from the plaster making sure the hand sculpt stays in the plaster half. 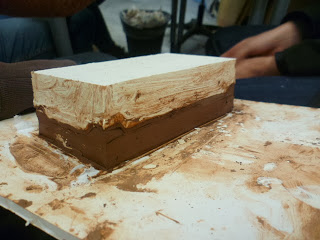 Step six: Clean as much clay off of the plaster and hand as possible.

Step seven: As shown in the photo below you need to add annother key to the other half of the exposed k&s.The blocks of yellow Plasticine around the arm will create a space which will allow any excess latex to pour out when you come to casting. 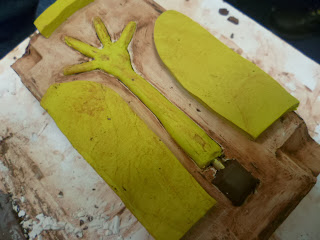 Step eight: Once again box up your mold and put some Vaseline on the plastic. Then pour in more Plaster and allow to dry. See photo below. 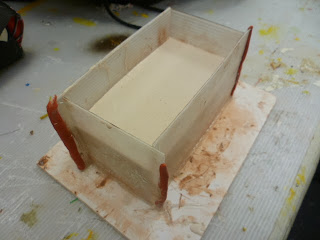 Step nine: Once your plaster has set you can un-box it. I suggest using a flat head screwdriver to gently pries the two halves of plaster apart. See the photos below.
You are now the proud owner of a plaster mold. You can now spend some time removing any leftover clay and Plasticine from the plaster and making it clean and tidy before you cast any latex in it. 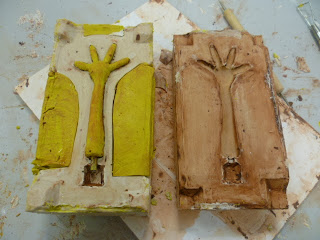 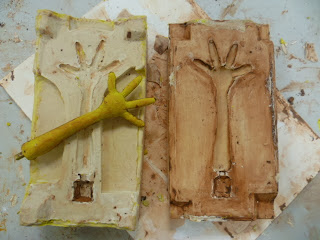